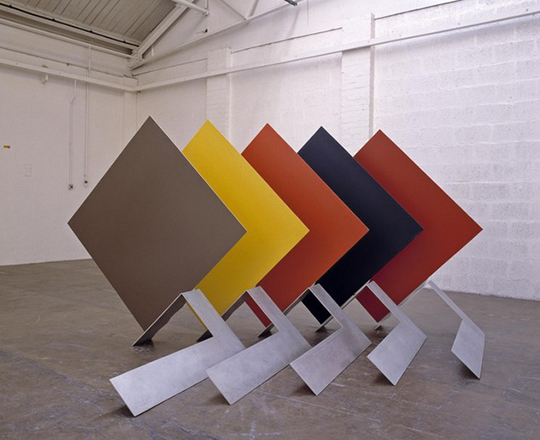 ' Bolus sees the series of which this work is a part as a return to first principles and his clearest assertion to date that certain properties of painting must be regarded as available to sculpture too. Despite their size, Bolus finds the process of making works in this series unusually easy and relaxed, as different planes can be slotted in and out of sequence as desired; in the finished sculpture the sequence of planes can be altered at will and the interval between one plate and the next set as wide or narrow as desired, so long as the facing blocks of colour will still interact. In this work, the direct operation of natural light is again important, altering the values of the planes of colour, as they qualify and partially merge with one another and radiate into the spectator’s own space. Just as the white supports in the works of 1967–8 acted to prevent colour becoming too exotic, so in this sculpture eggshell rather than gloss finish is employed, the colour contrasts being bold in themselves. This work concentrates many recurrent aspects of Bolus’s work. The plates being differently coloured on either side, as well as slanted, the work presents doubly contrasting aspects from each end. Although its elements are large they, and particularly the largest of them, touch the ground only very slightly. As in the 1966 sculptures, discrete elements combine, by repetition in ranks, to define boundaries that seem solid. Indeed from some angles the sculpture reads as a gigantic extended cube abutting, in the oar-like supporting fins, a three-dimensional extension of Bolus’s characteristic flat and rising V-form.'

The Aluminium that makes up these sculptures was produced for Jules Olitski while he was in St Neots Cambridge at the Aeromet factory making Sculpture in 1968. When he finished working and returned to the USA, he donated his remaining stock to Michael Bolus and fellow Artists working at the Kingsgate Road Studios in West Hampstead. Bolus originally conceived this work, together with 1st Sculpture 1969 and 1st Sculpture 1970, as one piece of 21 planes. However it was broken up into 3 pieces that were eventually aquired by the Tate gallery and National Gallery Washington. The Planes are painted a different colour on each side. Further stock of Olitski's Aluminium was also used to produce the Sculpture Bolus showed at Battersea park in 1977 as part of the Silver Jubilee exhibition of British Sculpture. An example of the use Jules Olitski was putting the Aluminium to can be seen here: ARTNET And here: METMUS