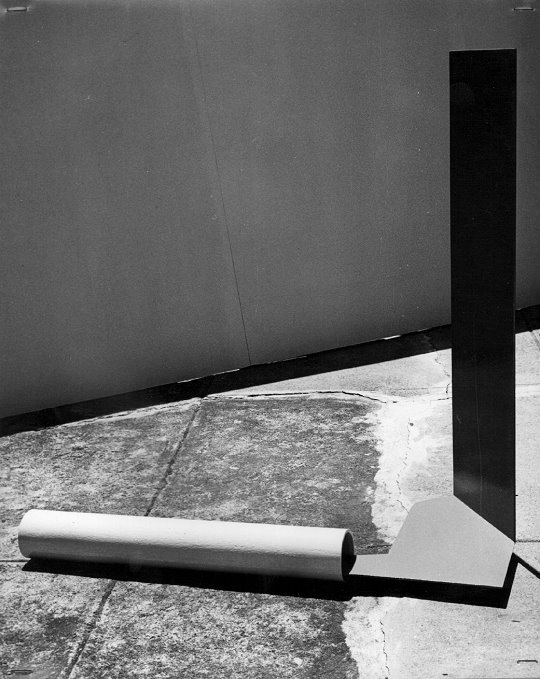 Lit: Richard Morphet, in catalogue of The Alistair McAlpine Gift, 1971, pp.52, 56. The notes on all acquisitions of works by Bolus from T01349 to T01359 inclusive are based on the compiler’s conversations with the artist in 1971 and were approved by him. They are quoted or adapted here from the text of the catalogue of the Alistair McAlpine Gift at the Tate Gallery in 1971. T01349, T01350, T01351 and T01352, were made during a brief period in South Africa in 1963. In ‘1st Sculpture’ one end of a single, irregular sheet of steel is inserted into a piece of tubing. The steel sheet is folded once, and stands just clear of the ground on small prongs, which help to define it as an autonomous element and insert it clearly into the cylinder. This work illustrates Bolus’s wish to produce sculptures which ‘make themselves’, or have for him a feeling, neither in nor out of art, of having been simply found. The steel sheet was an off-cut which he altered only by folding and painting. Bolus sees this, like others of his works, as having a still-life character, the sheet resembling a pool of ink spilling from a bottle, toothpaste being squeezed from a tube, or a growing plant in a pot. Published in The Tate Gallery Report 1970–1972, London 1972.